Click on a picture to get the full picture

Two weeks in Lyon and we loved it. The port is in a great location and the city is both old and charming and modern and well organized. Not nearly as large and grand as Paris but with all of the ingredients, and more, on a smaller scale. You can read online about Lyon’s history as the first Roman Capital of Gaul,  its frequent destruction by invaders from the east and its renaissance as the centre of the silk industry in France so I won’t spend any more time on that here. 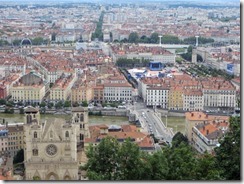 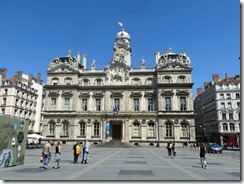 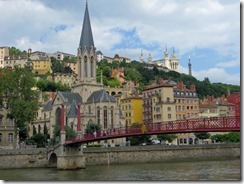 As a smaller city it is much easier to comprehend and get around helped by its thoroughly modern transport system that seamlessly ties together the metro, trams, buses and even the funicular railway. And it is very clean. 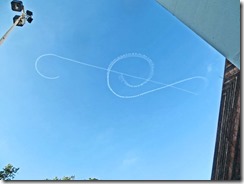 Our goal had been to get there in time for the festival of music which is on the summer solstice when the weather finally conformed.  The morning was grey and rainy but the afternoon was sunny and perfect and since then summer has stayed and the gloomy days of May are forgotten.  Walking around the 19th Century central part of town we found all sorts of live music on the streets:  middle eastern, irish, rock and roll, jazz, salsa, and football fans. 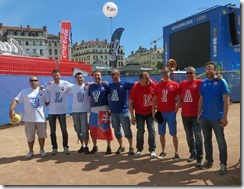 with some of the games played in and around Lyon.  The main square (Bellecour) was converted into a giant fan zone with large TVs to watch the various competition.  We had an idea of who was playing next by the different national colours that would come and go.  When Ireland lost to France here the local media talked fondly about the large party and how all the Irish and French fans got along so well together.  A good example to some other nationalities.

Of course we visited museums:  the giant Musee des Beaux Arts was an all day experience, the museum of Movies and Miniatures was just fun, the Lumiere Museum was a glimpse into the origin of movies enhanced by the location in Lumieres’ lovely Art Deco mansion and the Confluence Museum was an innovative perspective on Natural History with interesting special exhibits including a fabulous display of high definition video on an under the water in Antarctica. A walking tour of the narrow streets of medieval Old Lyon gave us a feel of the ancients town. There is still more to do when we return.

I don’t think we have yet plumbed the gastronomic depths of Lyon. The city prides itself on its cuisine but we did eat in a couple of “bouchons” the Lyonnaise name for small bistros, as well as some Tapas and others.  So far the food is a little on the rich side. 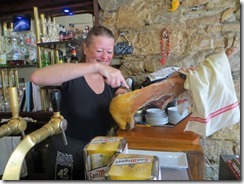 The port has a nominal limit of 4 days but as we arrived at very high water and the locks on the Rhone were closed no one was coming and going so there was no trouble extending.  We stayed for over two weeks, time enough for the water to slow down and normal traffic to resume and for us to make several more new boating friends.

We left reluctantly about a week ago and had more to appreciate the city from the river.  Now sitting under the trees to stay cool in Cuisery.  More on our cruise north in a little while. 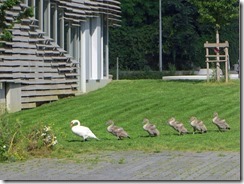 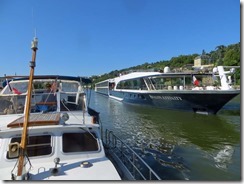